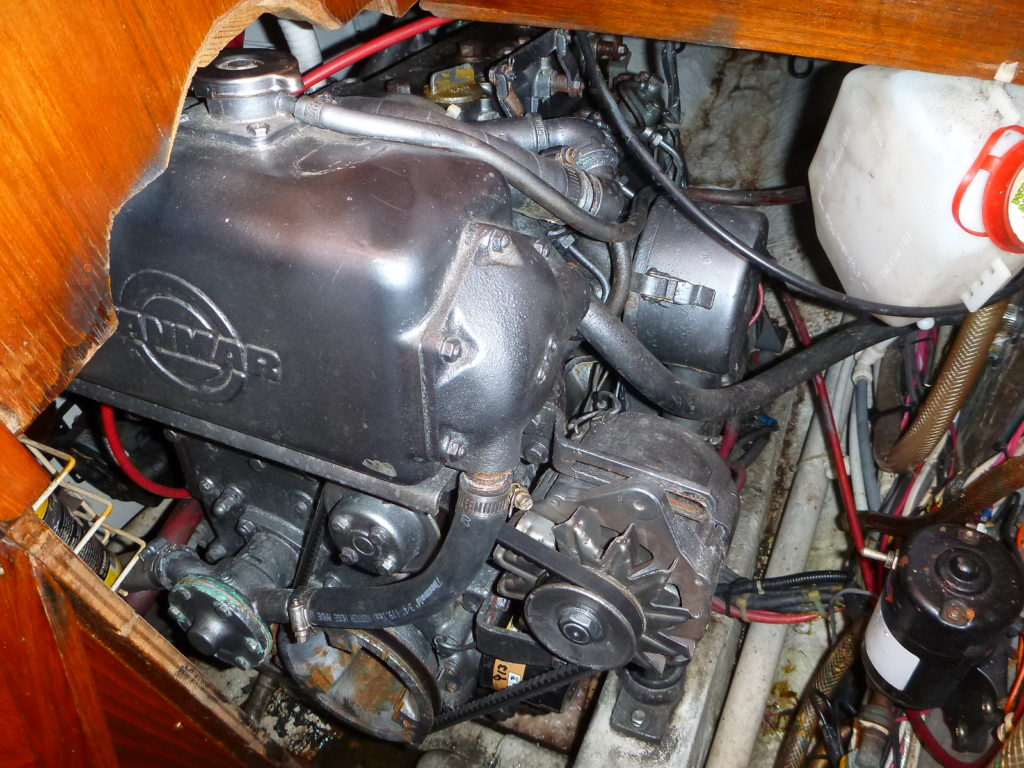 I’ve taken a break from the hull/deck project to deal with a problem I have been having on and off for a long time. A couple of years ago I started having issues with the engine over heating. It did not do it all the time, but rather was a bit random and would only over heat occasionally but was annoying and lowered my confidence in the motor.

Of course the first thought is the raw water pump but this has not been an issue and all through my problems the raw water flow was good. Only once did I have an issue with the impeller and it was promptly replaced. The problems I experienced were all on the closed part of the coolant system.

I checked the motor and ran some tests but was at a loss as to the cause. The fact that the problem was some what random did not help with the trouble shooting. Finally out of frustration I changed the radiator or coolant tank cap and added an expansion or overflow tank. This seemed to work as the problem appeared to go away.

When we went on our trip to the keys the motor did not over heat but at one point when we were having to motor into a strong headwind it did get hot enough I had to back down on the RPM some to keep it from overheating.

Later this past summer an odd symptom developed, the temperature would rise steady until it got to around 200 and then it would suddenly drop to 160 were it would again start to slowly rise again. It did this so fast I could watch the gauge do this over and over. Of course my first thought was a bad thermostat. Simply replace the thermostat. Except that made no difference, hmmm this was getting frustrating. I thought perhaps there was a flow problem so I started by checking the flow through the water heater heat exchange and bingo it was clogged. So I used a garden hose to pressurize it and with a sudden bust it covered me and the engine compartment it dirty water. Problem solved right?

Not so fast, although this seemed to solve the problem and the temperature was fine for awhile it was not to last. When doing a routine run at the dock the over temp alarm went off, damn not again. Okay time to get serious. The next day with a cold engine I started the motor up and used an IR thermometer to check temps at different locations on the engine following the flow the coolant should take. I also got out the manual and studied the cooling system and how it flowed through the motor. More on that in a bit. 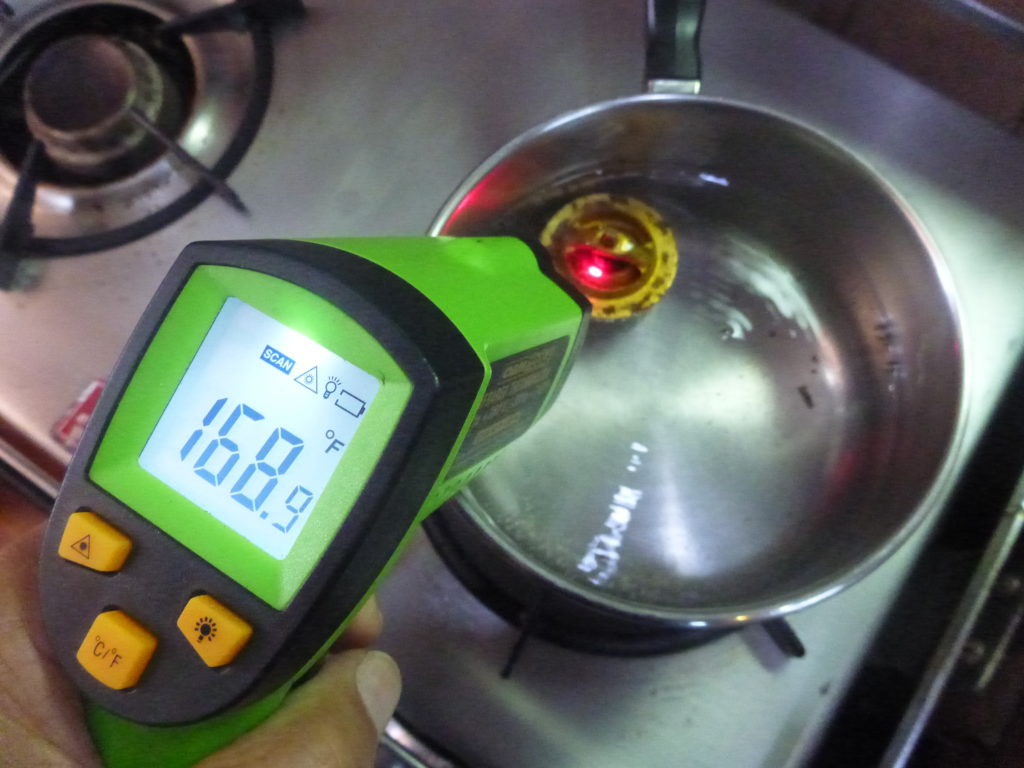 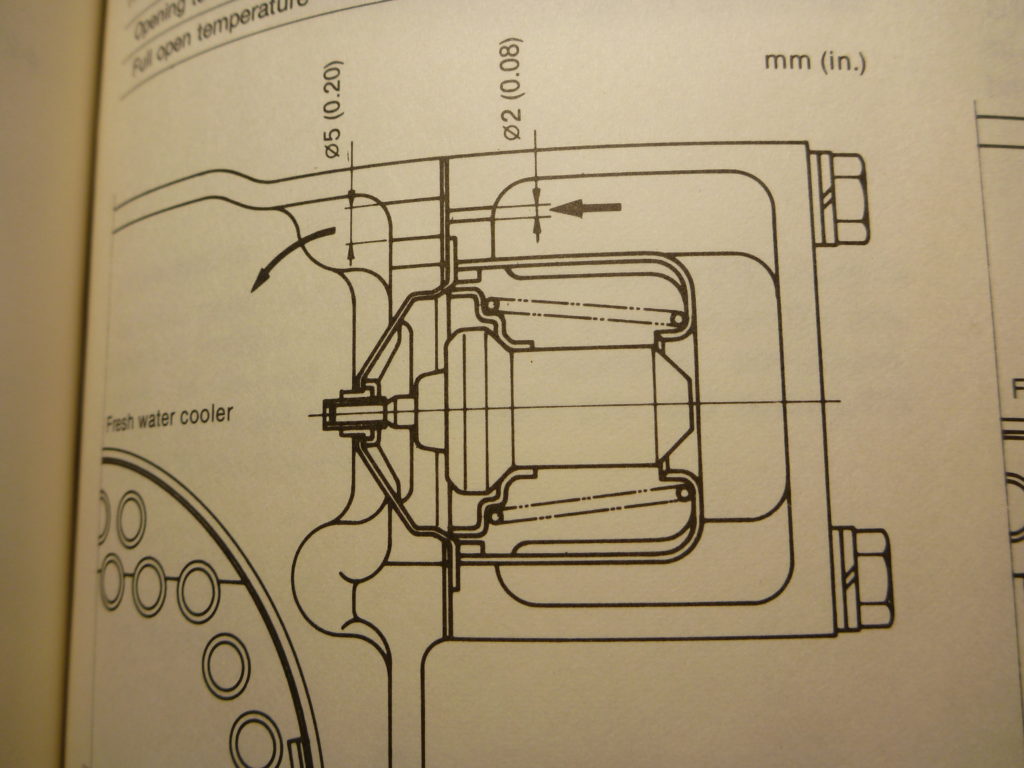 So I opened the thermostat housing yet one more time to check this hole. Sure enough it was clogged. in fact it looked like it had been blocked for some time and I ended up having to use a small drill to clean it out. I am optimistic this has been the issue all along. It makes sense and if the thermostat was not getting a proper flow past it it would behave oddly. Besides I am out of other ideas as to what the problem  has been. 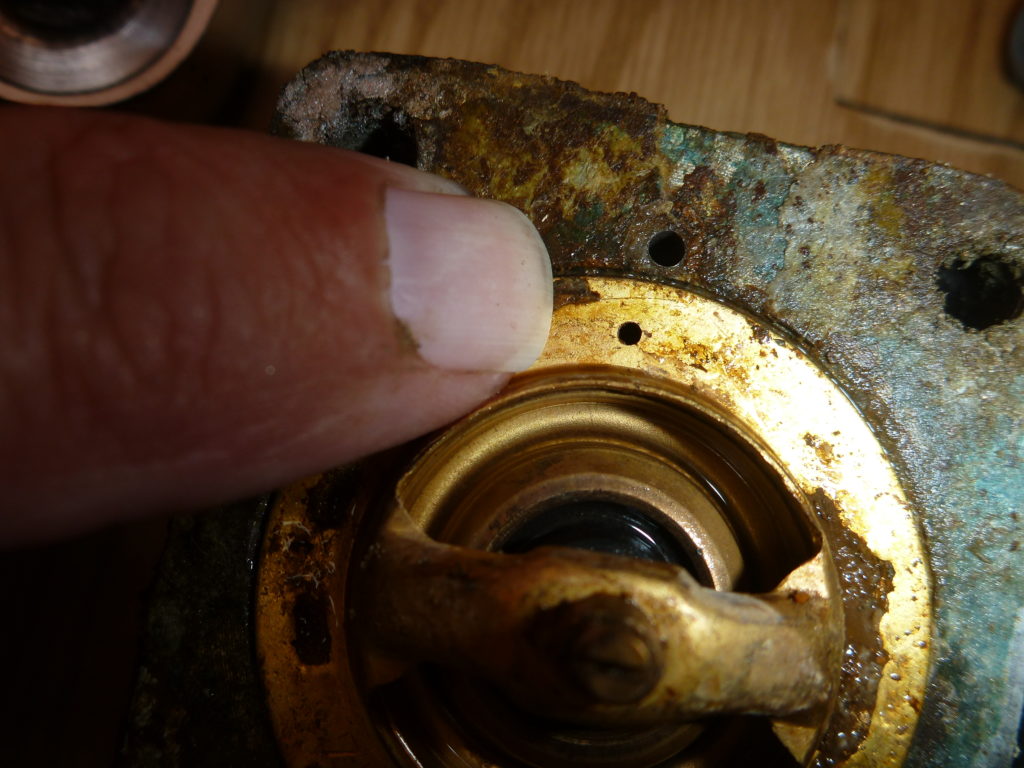 So the motor is now running fine and the temp right at 170-180 right where it should be. Now I know I could have just left the thermostat out and had my problems solved but I like things to work the way they were designed. The right temperature helps reduce oil sludge, sticky valves and will be more efficient. So I am hoping this is the end of my weird over heating issues. i am sure another problem will pop up to take its place, it is a boat after all, but for now I am keeping my fingers crossed. I will let you know if this is not the end of this issue.